Posted at 13:55h in Uncategorized by Reed Barrickman 0 Comments
0 Likes 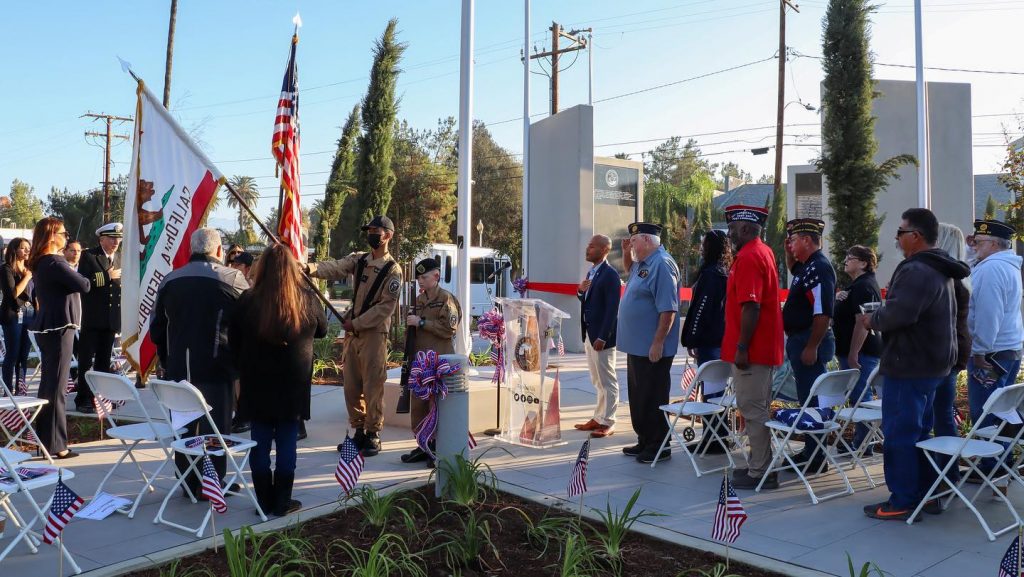 The City of Perris unveiled the Veterans Memorial in Downtown Perris at 101 South D Street in a somber and respectful ceremony on Saturday, November 6, 2021.

The Veteran’s Memorial is the result of strong collaboration by the community. Perris officials formed a Veterans Memorial Ad Hoc Committee, consisting of the commanders of the local VFW, American Legion and Inland Empire Buffalo Soldiers Heritage Foundation. The Committee was charged with selecting the location and finalizing the memorial design by Planning Commission Chair Shively, and with their first meeting held in May 2018, marked the official start of the project.

City officials worked closely with the Ad Hoc Committee in determining the location and design and soon after partnered with IDI Logistics on the construction. With this collaboration, the city can not only honor local veterans, but also continue with beautification efforts within the Downtown District, turning a former empty lot into a meaningful new community gathering space. Additionally, the collaboration with local veteran organizations as well as a private developer has enhanced the general partnership and relationship amongst all three parties and helped set a positive tone of community engagement within the community since the start of the project.

With the formation of the Ad Hoc Committee, it not only gave our veteran organizations direct input into and ownership of the project itself, but it also garnished the community support that eventually assisted in the funding of the project, by and large by direct and in-kind donations from the developer and their network of subcontractors, material providers and vendors.

The design of the Veterans Memorial considered the main and consistent components of such a display, but with the unique ideas and input of local organizations. Five 15-foot concrete monoliths acknowledge a list of names for Perris veterans representing each of the five branches of service (Army, Navy, Marines, Coast Guard and Air Force) with a temporary acrylic sheeting to be replaced in its final stage with names etched in glass. Five smaller pedestals in front of the monoliths will be completed with engraved plaques telling the history and origin of each represented branch.

The Veteran’s Memorial holds special importance to Perris Mayor Michael. M. Vargas as it was one of his first items of business he brought to the Council after becoming mayor. The project broke ground on May 12, 2021 and moved quickly toward the unveiling. Now, he’s happy to see it finally come to fruition.

“To have our very first veteran’s memorial in the city is very exciting,” said Vargas. “It’s important to express gratitude to our veterans for all they do to provide our freedoms, especially to those who paid the ultimate sacrifice. We hope this memorial honors them and is something that lasts for generations.”

Council Member Nava was proud of the completed project and hopes to keep the memory of these veterans strong for future generations.

“This project was long overdue, and we are so thankful to bring this to our Perris veterans,” said Nava. “We can never repay the debt you have paid, but we will keep your memory alive with this memorial.”

Council Member Malcolm Corona said this memorial is as nice as he had seen across the country.

“This memorial is beautiful. Other places have monuments, but I believe ours can stand up to any others across the country,” said Corona. “Thank you to our past, present and future veterans for all you do.”

Tim Moore of the Veterans Memorial Ad Hoc Committee and Commander of the American Legion Post 595 expressed his gratitude for the city’s unveiling.

“This memorial was built for the veterans of the City of Perris and for those in resting in our cemetery,” said Moore. “We took an oath to defend this country, with our lives if necessary, and we would do it again if we were asked, no matter what.”

More than 800 service members are buried in the Perris Valley Cemetery, dating back to the Civil and Spanish-American War. Since 1985, those who passed have been laid to rest in the Riverside National Cemetery. But for now, those who called Perris home will forever be remembered with this memorial.

Moore continued, “The City has gone out of it’s way big time with their commitment and the commitment from IDI Logistics. We wouldn’t have this beautiful monument without them, and we are grateful for their contribution.”

“The entire IDI Logistics team takes very seriously its commitment to make a difference and be active participants in the communities where we work. While IDI had the fortune to take the lead to construct this memorial, we could not have done it without so many friends and trade partners who contributed time, materials and labor to the project and we thank them for their support of the effort. IDI Logistics thanks our friends and colleagues at the City of Perris for the opportunity to be a part of such a meaningful and lasting tribute to those who paid the ultimate sacrifice for our freedom.” said Charlie McPhee, Senior Vice President and Regional Director, IDI Logistics West Region.

With more than 30 years’ experience and a track record of delivering more than 200 million square feet of innovative warehousing, distribution and manufacturing facilities, IDI logistics is a leading investor and developer of logistics real estate.

Sorry, the comment form is closed at this time.

As Vice President of Capital Deployment and Leasing, Jon oversees all leasing and property management in the state of Texas which includes approximately 8 million square feet of industrial space. Jon also oversees third party brokers and management teams in the Dallas, Memphis, Houston and Austin markets. Before his tenure at IDI Logistics, Jon held various roles at the industrial real estate firm Sealy and Company including managing the firms Asset Management department.

Jon has a master’s degree in real estate from Texas A&M and a bachelor’s in finance from LSU. He is a member of NAIOP (National Association of Industrial and Office Properties) and is working on his CCIM Designation.

Scott oversees the leasing and asset management efforts while overseeing the capital development and capital recycling work for the Chicago region. Scott is also responsible for sales and marketing analysis as well as acquisitions and dispositions, management of third-party property management, and maintaining interaction with clients and brokers.

He holds a BS from Indiana University’s Kelley School of Business and an MBA from the University of Wisconsin-Madison where he focused on real estate and urban land economics. Gibbel is a member of NAIOP, the commercial real estate development association, and currently sits on the organization’s Developing Leaders Board.

As Vice President of Human Resources, Michele is responsible for directing all Human Resources initiatives in key areas such as benefits, staffing, onboarding, performance management, employee relations, and compensation. Michele also serves as strategic leader for all organizational development and effectiveness, training, and succession planning initiatives.

Prior to joining IDI, Michele was Vice President, Director of Talent and Culture at BrightSphere Investment Group in Boston. She was responsible for providing strategic HR Business Partner support and leadership to senior management. She was also responsible for all aspects of BrightSphere employee relations and staffing, employee advocacy and engagement, culture, learning and development, and performance management.

David received his bachelor’s degree from Brown University, and his law degree (J.D.) from the University of Virginia. He is a member of the National Association of Industrial and Office Properties (NAIOP), including its Legal Forum.

As Market Officer, Justin is responsible for sourcing, underwriting, and acquiring industrial investments on a regional basis. He is also directly involved in the asset management of IDI Logistics’ holdings in New York, New Jersey, Pennsylvania, and the Baltimore-Washington corridor. His responsibilities include asset strategy recommendation, execution, and reporting, as well as the oversight of third-party leasing and management teams.

As Market Officer, Bob is responsible for the asset management of IDI Logistics’ holdings in the Ohio, Kentucky and Indiana. His responsibilities include asset strategy recommendation, execution, and reporting, as well as the oversight of third-party leasing and management teams. He is also directly involved in sourcing, underwriting, and acquiring industrial investments on a regional basis.

As Senior Vice President of IDI Logistics’ West region, Charlie McPhee is responsible for all leasing, disposition, acquisitions, and development in the western United States. During his career, Charlie has developed over $3 billion of real estate in industrial, office, self-storage and retail. Charlie graduated from Santa Clara University with a B.A. in English.

Matt is Senior Vice President for IDI Logistics’ East Region which serves markets including Atlanta, South Florida, Northern New Jersey and Eastern Pennsylvania. Based in the company’s Atlanta office, Matt leads all capital deployment and operations efforts for the region, including building acquisitions, dispositions, development, and asset management, along with land acquisition and development.

Matt’s expertise includes capital deployment, development, leasing, asset management, and dispositions. Breaux holds a BA in Business Administration from Rhodes College, is a CFA Charterholder and is a member of National Association of Industrial and Office Properties (NAIOP).

Tim holds a B.S. degree in Biology from Rhodes College in Memphis.

Giancarlo is a Vice President of Capital Deployment and Leasing at IDI Logistics and is responsible for sourcing, underwriting, and executing investment acquisitions within Southern California. Additionally, he is the asset manager for the +6M SF SoCal operating portfolio. In his role within the West Region, Giancarlo has been an integral component of over $1B of deployment, leasing, and disposition consideration. During that time the team has executed on establishing a +9M SF development pipeline and over 1M SF of existing building acquisitions.

Giancarlo received his B.B.A in Finance from the University of Texas at El Paso and holds the Certified Commercial Investment Member (CCIM) designation. He is fluent in Italian and Spanish.

As Vice President of Capital Deployment, Brandon is responsible for sourcing land and building acquisitions, in addition to leasing efforts in Northern California, Seattle, and other West region markets. Brandon received his B.B.A in Finance from California State University at Fullerton. He is a member of NAIOP and is a California State-Licensed Broker.

Mark oversees all of IDI Logistics’ capital deployment and operations in the U.S. Previously, Mark was Senior Principal at Molto Properties where he oversaw Molto’s entry into the development arena and expansion beyond Chicago. Prior to joining Molto, Mark was the Chief Operating Officer of McShane Development Company and Managing Director for AMB’s Midwest Region. At AMB, he ran an operating business with more than 40 million square feet of industrial assets that were vertically integrated from in-house property management to acquisitions and developments. He also worked at First Industrial for more than 10 years in various positions.

As Executive Vice President and Chief Financial Officer, Shawn oversees all financial aspects of the business, including FP&A, accounting, treasury, tax, finance and IT functions. Shawn joined IDI Logistics in 2013 after the merger with Verde Realty where he served as Chief Accounting Officer and VP Finance. Prior to Verde Realty, he was a Senior Manager at Deloitte where he worked primarily in the commercial real estate industry. Shawn holds a B.B.A. degree from Wilfrid Laurier University in Canada, and an M.B.A. from the University of Georgia.

As Market Officer, Nick Faber oversees leasing, asset management, capital development and capital recycling efforts for the Atlanta and Florida regions. His responsibilities include asset strategy recommendation, execution, and reporting, as well as the oversight of third-party leasing and management teams.